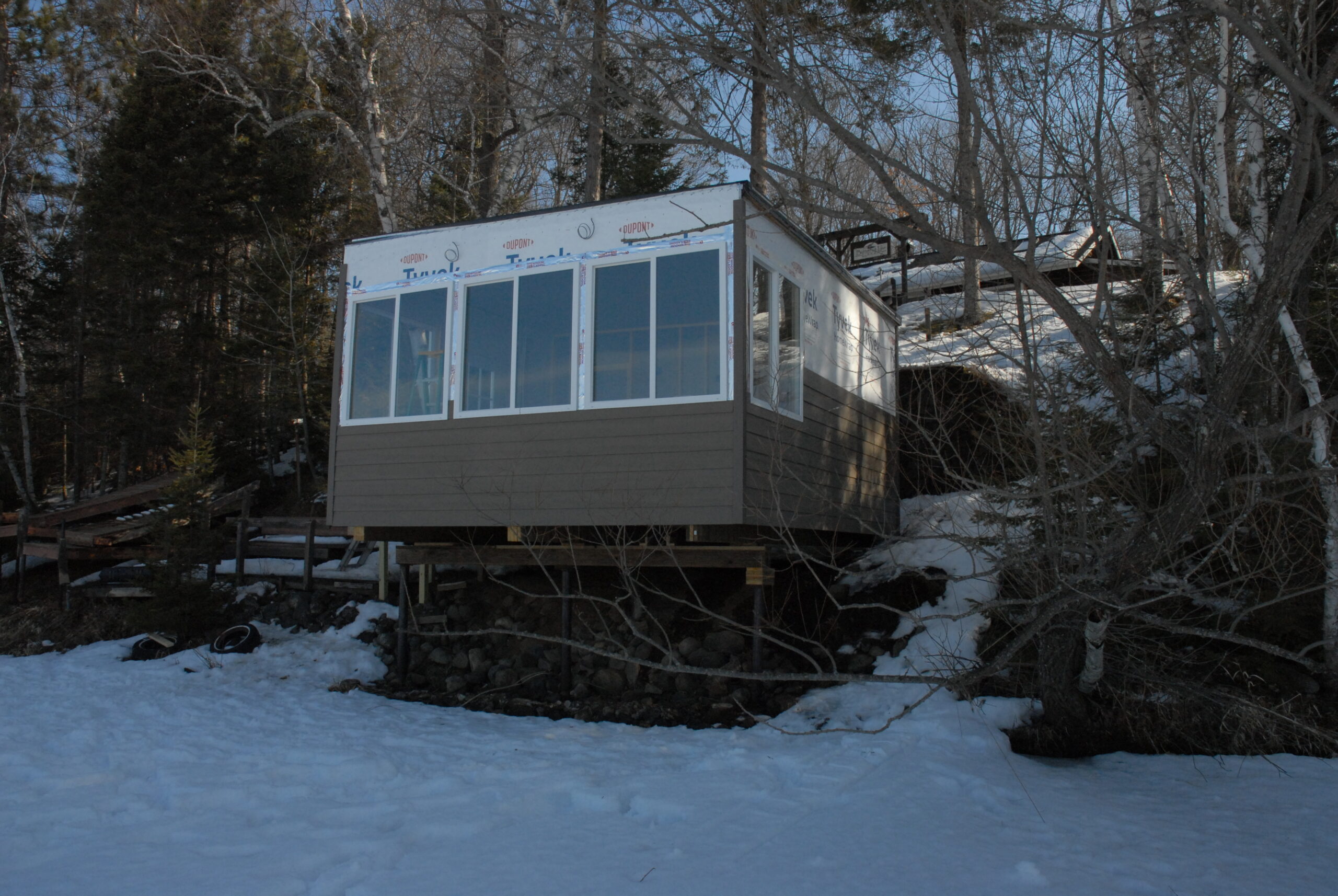 I was doing such a good job of blog entries back in February when the weather was too severe to work outside. And now it's June and the Boathouse has been done for a while now. Rather than revisit all the details of completing construction, I'll just summarize how it all wrapped up.

When we left off, it was November and we had the rubber roof on and the house wrap on the exterior of the building. We got started on the siding on the east and north wall. The big issue was getting the old deck and stairs ripped out and the new deck/stairs built so we could actually GET to the building safely. In early November, the daily temperatures might get above freezing in the afternoon. Cold kills ambition. We came up with a lot of excuses to drink coffee in the morning rather than run out into 20 degree weather to cut lumber. Mother nature offered us a few reprieves as we went into late November and December. There were weekends in the 40's at times, so we took advantage of the heat and built as fast as a long-toothed beaver. As January arrived, we had our deck and stairs done, affording us the ability to get down to the building without using a ladder anymore.

As March arrived and we could work outside for more than an hour at a time without being too uncomfortable. We went into high gear getting siding done and other tasks like rough electrical on the inside. By April we were drywalling inside, and thinking about the upper roof deck. And in mid-May, we finalized the upper roof deck, got the electric hooked up, and began furnishing the interior.

This was a much larger and more complicated project than we first expected. Accordingly, there are some people I'd like to thank for their advice, skills, and work ethic. Randy was instrumental in pitching in from the first day to the final fastener. He was our motivational coach, auxiliary muscle, local historian, and humorist. Dean - thank you for your extraordinary carpentry skills, and outstanding friendship. Yes, we were 1/2" off. We'll be totally square when we rebuild this 80 years from now. Tom - it has been our great privilege to have you be a part of this project. I hope we upheld the aspirations you've carried when this idea first appeared on the "someday" list. Todd - you made our drywalling skills look legitimate! Don - thank you for the chili and your unending good nature. And finally, thank you Mikey for the glorious burn. The old boathouse had a little warmth left in it after all.

So go have a look at the boathouse on the webpage now that it's done. It is the perfect place to congregate with friends on the lake. Instead of building structures, we can now focus on building great memories.